The Nexus between Exchange Rate Variation and Economic Growth in Nigeria

This research paper is centered on the nexus between exchange rate variation and economic growth in Nigeria with emphasis to the purchasing power of the average Nigerians and the level of international transaction. Exchange rate fluctuations have been of serious concern to the monetary authorities, policy makers and business tycoons of developing countries, Nigeria inclusive because of the relevance of exchange rate in international trade, investment and in determining the level of output growth of a country. Therefore it is vital to examine the degree at which exchange rate fluctuates which had called for a lot of attention in Nigeria. This study examined the Impact of Exchange Rate Fluctuation on the Nigerian Economic Growth using an annual data of forty-three (43) years covering the period (1970-2013). The standard deviation method was employed to capture and estimate the fluctuation inherent in the model as regards the research’s objective. The study employed econometric techniques such as; Multiple Regression Model, Augmented Dickey Fuller (ADF) test, Johansen Co-integration test and the Error Correction Model (ECM). Evidence from this study exhibited that there exists a positive but insignificant impact of exchange rate fluctuation on Nigerian economic growth in both the long run and short run. This result is attributed to the ability of the Nigerian government to effectively regulate some other important macroeconomic variables which can infuriate exchange rate which has thereby helped curtail the effects of exchange rate fluctuation during the study period. This is an indication that monetary authorities might have initiated policies that helped absorb the influence of exchange rate fluctuation on economic growth in Nigeria. Therefore, the government should encourage domes-tic production of goods and services for Naira exchange rate appreciation and generally to promote economic growth in Nigeria- moreover to maintain and sustain exchange rate and economic stability. In the same vein, the government should pay more attention to other more volatile macroeconomic variables like oil price and inflation rate in Nigeria.

Reference to this paper should be made as follows: Amassoma, D. (2017). “The Nexus between Ex-change Rate Variation and Economic Growth in Nigeria”, Journal of Entrepreneurship, Business and Economics, Vol. 5, No. 1, pp. 1–40. 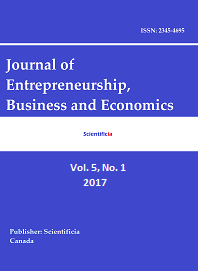